As I mentioned in my previous post, we had a tournament this past Saturday, 15 October, 2016, at Imperial Outpost Games in Glendale, AZ.  I only got to play in Round 2, unfortunately, but it was a fun game of Careful Advance, pitting my unconventional UCM forces against Andrew Burke’s PHR army that contained a few surprises.

Last Saturday, October 15th, 2016, we held our 12th Dropzone Commander tournament, this time at Imperial Outpost Games (IO) in Glendale, AZ.  Once again we had 6 players, but unfortunately only for Round 2 – one of the guys, Darryl, was very late getting to IO due to a freeway closure (that I forgot to warn him about – D’oh!), and when he did arrive he was very gimpy due to an injury to his Achilles tendon, so he only lasted one Round, Round 2.

And, as promised, here is Part 2 of the epic saga of the battle of my beloved PHR against the wily shenanigans of the shady Shaltari of the even wilier Major Awesome!

One thing that I forgot to mention in Part 1 is that after he found the objective in his home building in Turn 2, Andrew had one squad of Braves dematerialize through a Haven gate, which he prudently kept in the shadow of his home objective building, and had the other squad of Braves move to the central objective building via an Underground Monorail, despite that structure being severely damaged, and likely to take even more of a pounding.  I had considered jumping one of my squads of Valkyries into that building after searching for my home objective Turn 3, and then moving my Immortals there as well (after one of my Infantry squads eventually found my home objective, of course), but with Andrew's Firstborns still in orbit and me without any Sirens, I opted to avoid that structure and stick with my original plan to bring it down as quickly as possible.  There was an outside chance that I could've ultimately won the CQB that would've gone down there if I'd done this, but I didn't like my chances, and liked the idea of just flat out denying Andrew any more easy VPs from an objective he definitely could have found even better.

This past Sunday I had a 1,500 point Dropzone Commander game of Careful Advance against Andrew Fitzgerald’s beautifully painted Shaltari. Andrew is Major Awesome on the Hawk Forum, and he used to be a regular opponent of mine, but our life situations changed as well as our LGS situation, and it’s been difficult to get games in with him this year. But the wife was out of town last weekend, so I was able to make the long trek to Imperial Outpost Games in Glendale, AZ, and throw down with Major Awesome!

Three weeks ago yesterday, on August 6th, 2016, we held our eleventh tournament in sixteen months.  I was posting on the Hawk forum throughout that day, but by the time it was over and we were all faced with packing up four tables and all of our gear, and then the long drive home, I just didn't have it in me to report on Round 3 and the final results.
I intended to post up this here blog post the next day, or early the next week, but Life got in the way, namely the dreaded and exhausting search for a new job.  Then my youngest came home from her summer mission, and she leaves to go back to college on August 31st, and I got more than a little distracted...
I even posted on the Orbital Bombardment blog and the Swedish DzC blog a promise that I would get this done "tomorrow", but that was over a week ago, too...
I guess it's like my mother always used to say:  "The road to Hell is paved with good intentions."
Ouch.
So, to everyone who has put up with my insane ramblings on the OB blog, the Swedish blog, the Hawk forum and Facebook in the meantime, and were expecting this blog post at least a week and a half ago, my most sincere apologies.  Here is the much promised, under-delivered and very late blog post on my own, personal blog that you (may or may not) have been waiting for...
(Really, I mean it this time.  With pictures and everything.)
Read more »
Posted by jdwelch62 at 12:02 AM No comments: 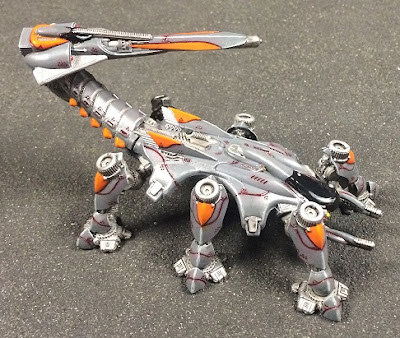 Well, I apologize for the very long wait, but it's been rather busy for me these past weeks.  After my last post I left for GenCon, and had an amazing time.  However, prior to leaving for GenCon I worked by tail off getting over 1,500 points of my new PHR paint scheme painted up and ready.  I finished at 10:00 PM on the Sunday evening before leaving for Indianapolis on Wednesday morning, July 29th.  I didn't manage to get any Infantry painted up in the new scheme, but reasoned that I could use what I had from my old blue-and-red scheme for any games I could get in at GenCon. 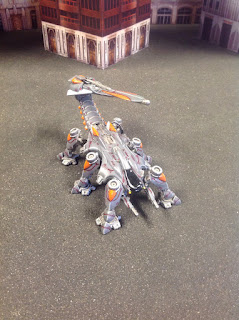 I've been working on these guys for quite some time.  After the Helios were finished, Mega Mike suggested that I do something different for the walkers and/or the rest of my army. So with input from a friend at my FLGS, I chose orange as an accent color. The effect is quite striking, although it looks in like these pictures the Orange is a bit washed out and looks more yellow than orange. I took these pictures with my iPad in the FLGS at about 5:00 PM today, which was a bright, sunny day in Mesa, AZ. Two of the walls of the store are all windows, so there's lots of natural light, plus the fluorescent lights overhead.  I'm going to try to take some more pictures after the sun goes down to see if I get a truer color, but I suspect I'll just get a lot of reflections from the overheads. If all else fails, I'll take pictures tomorrow in my backyard, where I get decent natural lighting at dusk, but I wanted to get these posted (as I wait for gloss varnish to dry on the latest batch) so I can try to post on the Hawk Forum and enter these guys in the July Painting Competition.

My UCM Finally Getting Some Love

Not this past weekend, but the weekend before (April 10th & 11th) I managed to get a great deal done on some of my UCM models, specifically 6 Sabres and 9 Rapiers.  I also got the bacecoat, wash and drybrushing worked out on 3 Condors, but ran out of time before I could put the detailed touches on them.
Read more »
Posted by jdwelch62 at 11:05 AM No comments:

So, as some of you might know, I love my PHR (Post-Human Republic).  It’s my “first” army for Dropzone Commander, and it’s the one that I got fully painted up for Valhalla last October.  Here are a few pictures of my painted PHR models: 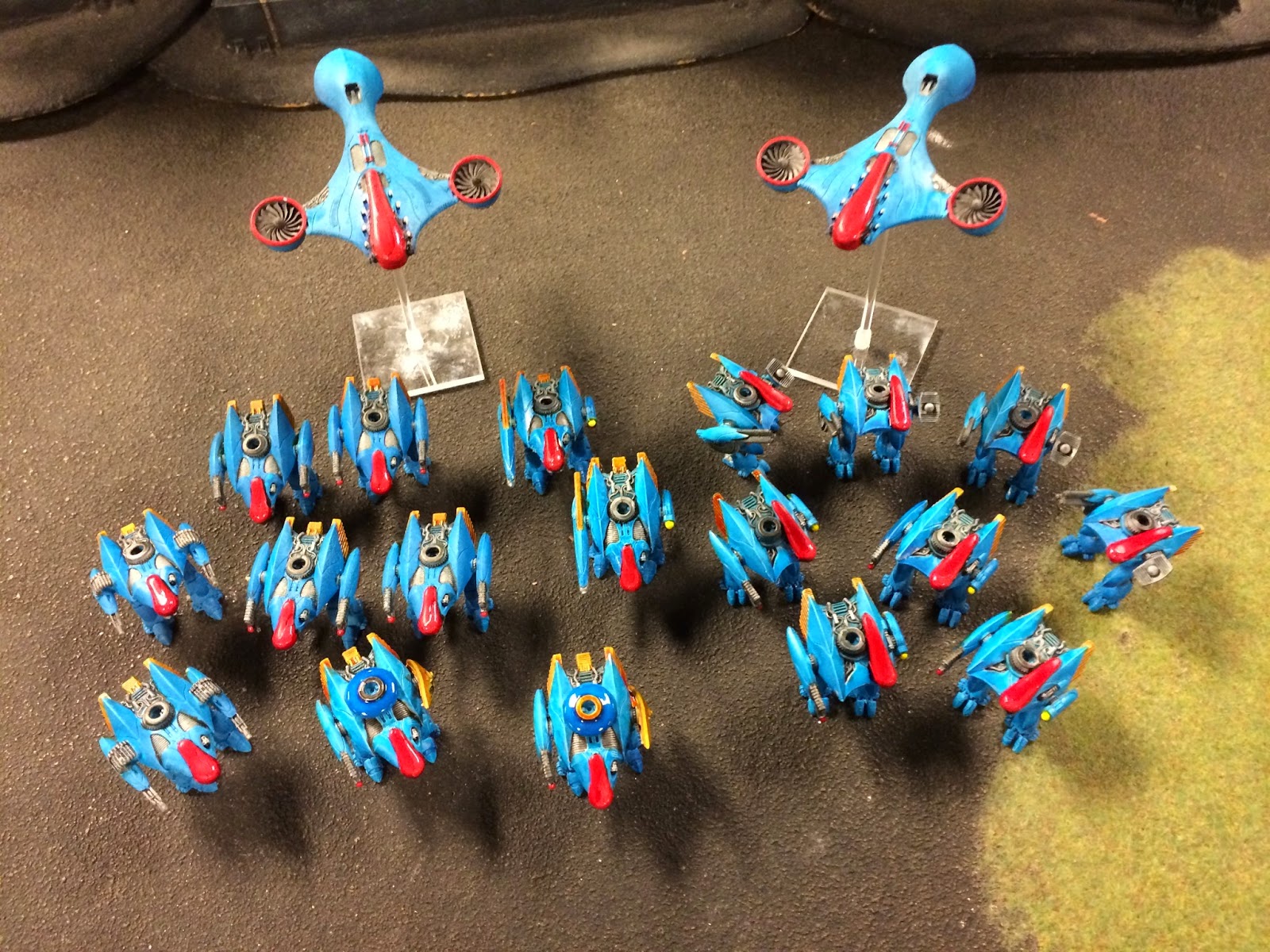 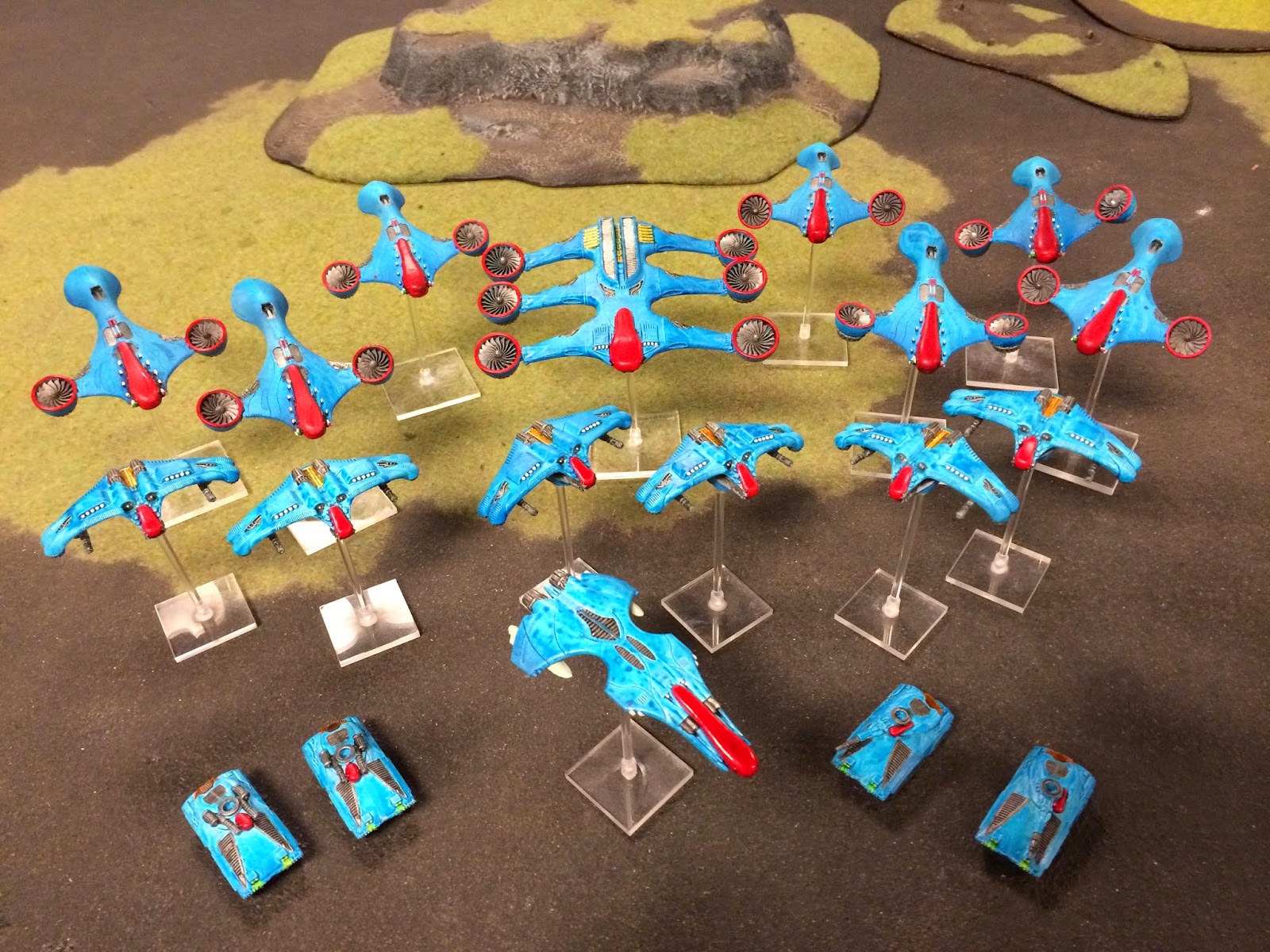